There is so much that I never thought I was capable of until now. Four weeks ago I turned twenty years old and at the sound of my alarm that morning I reached for my ‘Dear Twenty Year Old Me’ letter which I had been saving since I was eleven years old.  When I was eleven I had my whole life planned out, after I figured out that my Hogwarts letter had obviously been lost in the mail I decided that I needed to proceed with Plan B while the Hogwarts sorted itself out.  I always wanted to be a teacher. I always wanted to be a writer.  Neither of these jobs ever appeared mutually exclusive to me and I was never lacking in role models.  My experience with education has been an overwhelmingly positive one where I have been able to develop numerous connections with fantastic educators.  I have vivid memories of elementary school – one of my favourite teachers taught our Art, Gym, and Math classes all at the same time at one point and she was the one who taught me how to run.  But I’m getting ahead of myself, let’s go back to the letter.  My letter.  Over the years I’ve thought about it, I’ve even been tempted to open it early at times but I never did, somehow I felt that would be disloyal to my homeroom teacher, Mrs. Scott.  She was a woman with a heart full of love, a brilliant imagination, and a sharp wit – I thought she was wonderful.  Mrs. Scott was the one who asked us to write letters to ourselves in the future.   I like to think that those letters we wrote were Mrs. Scott’s way of looking out for us after we left school. 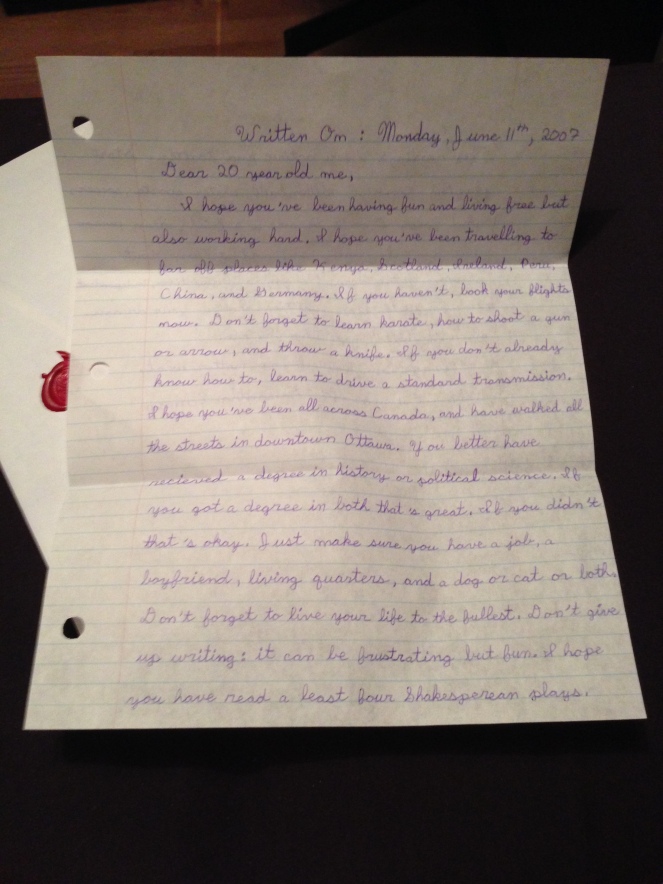 Sometimes teachers are like parents, they know when something is going to happen before it does and somehow they usually know what you need to hear.  Note that I wrote what you NEED to hear, not what you WANT to hear.  Reading that letter on my birthday was a gift in itself.  It was as if I had opened up a portal to my past and all of a sudden I was back in my grade six classroom carefully pondering what I wanted my twenty year old self to know.  I was pleasantly surprised to find out that I was an insightful eleven year old though my age shows at certain points in the letter most of it deals with how to be a good person.  Beyond being a good person it talks about being Sam Lehman and being the best Sam Lehman I could ever be.  I rejoiced inside when I realized that I had in fact nixed the idea of putting in a phrase such as, “I hope you’ve gone sky diving and conquered your fear of heights,” and I smiled when I read over the portion about walking all of the streets in downtown Ottawa.  I wrote a post detailing my adventures downtown earlier on in the year.  I was taken slightly aback by my eleven year old self’s certainty that I would have moved out of my house, found a boyfriend, and adopted two cats by this point in my life but hey, a girl can definitely dream.  Some of my words moved me, others made me laugh but the feeling that overwhelmed me while I read that letter was contentment.  I was content in that moment and I am content now – I am exactly (or almost exactly) where I thought I would be at this point in time and that reassured me like nothing else.  There’s nothing comparable to listening to your own heart, soul, and mind tell you the truth.
In my letter I told myself to stop wasting time on people who won’t really be my friends in the long run [post].  I told myself to stay strong, to pursue my dreams, and to let nothing stand in my way.  Eleven year old me would be proud of twenty year old me, I know it.  In the past nine years I have done things that I never thought I would have the courage or strength to do and that’s due to me.  Still, I credit everyone who has supported me along the way, my true friends, my teachers, my parents, my bosses, my professors, and everyone in between – I can never thank any of you enough for believing in me.  Lastly though I want to thank myself. Without me there would be no Sam Lehman and I have grown up to the point that I feel comfortable believing in myself and my own value.  I am content with who I am.  I am enough. And that’s beautiful.
Now you didn’t think that I would pass up this opportunity to reflect a bit on my life and accomplishments did you? On Sunday September 20th for instance I ran my first 5k race.  That’s where Mrs. Campbell, my Phys. Ed teacher comes in again – I mentioned her up above earlier in the first paragraph.  She was one of the first people in life to see me struggle.  As a young child I had a minor form of asthma and running was not my strong suit, it still isn’t but when I made the decision to sign up for the Ottawa Army Run I remembered Mrs. Campbell teaching me how to breath properly while running.  I remembered her insistence that I could keep going when my class did runs  around the block, and while I was usually at the back of the pack I always finished. 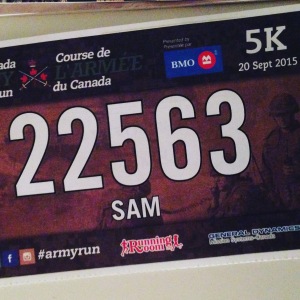 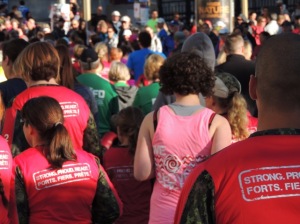 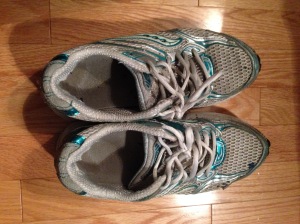 The morning of the Army Run I woke up with one goal in mind – finishing the race.  Now I know that a 5k isn’t too bad compared to a half marathon or a full marathon but it was a big deal to me.  I was so nervous that morning I could hardly eat; however, I found myself calming as I pulled on my outfit for the morning.  I wore AOII letters for my run. 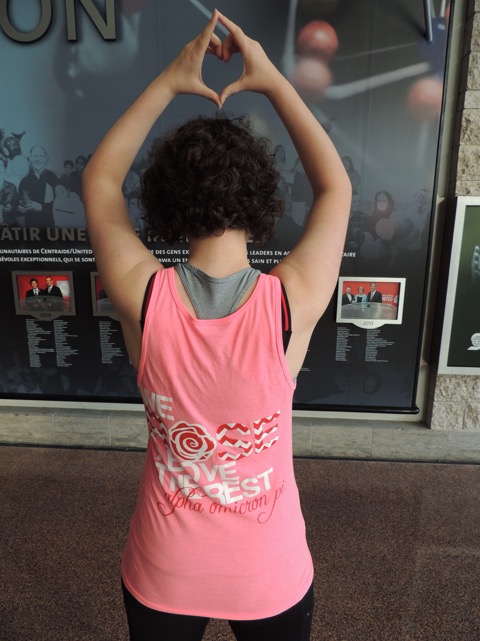 I drew upon my sisters and their strength (whether they knew it or not) in order to complete my run.  And run I did.  For the first 2k I actually ran straight through and throughout the rest of the morning I alternated between jogging, running, and the occasional few steps of walking.  As I neared the final kilometre I heard someone calling my name, I thought I might have been hallucinating given that it was quite hot out so imagine my surprise when my advisor for my position in AOII pulled up alongside me.  Running never felt so fulfilling as it did when I ran beside my sister.  As I crossed the finish line thoughts raced through my mind as I tried to slow my breathing and heart rate – I thought about my inspirations – I thought about my sisters, my advisor, my Littles, my mentor, and every single other person who helped me achieve my goal.  On that Sunday I proved something to myself – I am exactly who I am supposed to be.  I realized that I am capable.  I can wear running shoes in the morning and switch to heels without a fuss right after a race. I can do amazing things.  I am exactly where I am supposed to be and every challenge that I embrace will help me stay true to myself.  I am that strong and happy woman that I wrote to when I was eleven.
Dear Eleven Year Old Me,
You have no idea of the great things in store for you.  You will laugh, cry, shout, and run.  Yes, you will run.  You will find sisters and best friends.  You will make mistakes, you will grow your familial relationships, and you will study books you have never heard of (and a few you will have already read).  You will not allow yourself to be limited.  You will be exactly who you want to become and life will be amazing.
Love,
Twenty Year Old Me
P.S. Try to keep the worrying to a minimum because there’s a difference between caring and stressing.

One thought on “Dear Twenty Year Old Me: The Letter”