I’m a hardcore Potterhead. For those of you who are not familiar with that term it applies to fans of J.K. Rowling’s book series Harry Potter. The word is also applicable to fans of the film adaptations of said books because in my mind book and movie fans have too much in common to fight over how they fell in love with a fandom. I am so attached to the Potterverse that various locations in my house appear to be shrines to Rowling’s world and her characters. Growing up my heroine and role model was Hermione Granger, and even now she is one of my favourite fictional characters. Emma Watson is now one of my adult role models but I will never forget Hermione and what she taught me. However, despite my love for Hermione and what she represents she was a fleeting thought in my mind last year at Ottawa Comic Con when I was trying to decide on who to cosplay as for this year.

This is Ottawa Comic Con’s fifth anniversary and I wanted to do something to mark the occasion. The idea came to me in a flash as I perused a stall selling wands based on various Harry Potter characters. I reached out to test one of the pieces on display (they were encouraging this among customers – ordinarily I never touch things that are not mine) and as I flicked around a navy blue wand with swatches of brown I fell in love. When I flipped over the box to see who it belonged to in Rowling’s universe I smiled broadly, “Of course something this delicate yet effective would belong to her,” I remember thinking. The name on the box, if you haven’t guessed already, was Fleur Delacour.
Fleur is often overlooked in my mind. I remember when I first encountered her as a reader and being the curly haired teenage bookworm that I was I recall wanting not to like her. That plan fell flat quite quickly (I think it lasted about five minutes) because well, she is as much of a role model as Hermione. Her style, grace, and determination swiftly won me over as she developed throughout the Goblet of Fire and the rest of the series. She is one of the characters that pops into my head whenever I’m frustrated or hankering to give someone a dressing down – she prods me to take the high road or, barring that, to deliver a take down so polite that no one even realizes what has taken place until ten years down the road.
I chose Fleur as my cosplay for this year for several reasons: a) I’ve never cosplayed as someone from the HP Universe, b) she’s more of a minor character than a major one, c) she’s a blonde, and d) she’s pretty freaking cool.
*Some of my high school classmates might dispute claim ‘a)’ seeing as my arm was often the first one to shoot in the air when teachers asked questions, much like Hermione’s.
Since I started cosplaying three years ago I decided that every character I would portray should be a powerful, complex, and dynamic person. In the past my choices have ranged from Inara Serra from Firefly to Morgana Pendragon from Merlin. Last year I catalogued my time as Black Widow  in a two part blog series where I discussed sexism, comic books, the MCU (Marvel Cinematic Universe), and the construction of my cosplay. Fleur seemed a natural successor to those women.
As a more minor character in the series there is more room for personal expression with someone like Fleur because, while she has certain very defined personality traits, there is still a lot that readers and moviegoers will never know about her. When I went out on my first ever cosplay photoshoot with my dad I felt free to construct my own narrative around different motions and expressions that likely would not suit a more central player in the series. Every photo and frame was a chance to play around with the character of Fleur and who I thought she would be given the environments we chose as backdrops.
For instance in the photo above I stopped to look in the mirror and then thought about how Fleur would approach this moment. It’s establish in the novels that she is gorgeous, being part-Veela doesn’t hurt, but I think she looks beyond her beauty a lot. She endeavours to be more than her appearance, which is why upon confronting the mirror I practiced my wand form instead of idly fixing my hair.
Fleur is a proud woman. She knows her value (Peggy Carter would be proud) and she is unafraid of pursuing what she wants. When she became acquainted with Bill Weasley in Goblet of Fire she sized him up as a good man and as Pottermore states, “[a]ll it takes is for Fleur to take a job to ‘improve [her] Eenglish’ and bam, they’re married within two years. More power to Fleur, we say.” She’s a queen, whether she’s at Hogwarts, Beauxbatons, or Shell Cottage.
Now let me address my third reason for picking Fleur, I swear it’s not as superficial as it sounds! Yes, she’s blonde. Who among you has never wanted to try out a different hair colour (or in this case a different personality altogether) for a day? Last year I fell in love with my red hair. I even considered getting my hair coloured just for the summer because of how attached I became to being a redhead. So, while I don’t think this character will push me towards the salon anytime soon it was fun to be a blonde for a few hours. In fact, one might call the experience magical!

I think what draws me to her the most though is her unwavering commitment to herself and what she deems important. She doesn’t hold her opinions back when interacting with her future mother-in-law, the formidable Molly Weasley, and she stands by Bill when he’s attacked by Fenrir Greyback. Her love for her sister is also inspiring. As a sorority woman sisterhood is an extremely significant part of my life. The fact that the person Fleur would miss most in the second task was her sister, Gabrielle, in contrast to Diggory and Krum’s selections – their respective girlfriends – says a great deal about her as a person.

I honestly cannot wait to represent Fleur at Comic Con today! I’ll make sure to let you all know how it goes, but for now here are some more photos. (Photo credits: Ken Lehman)

*A post detailing my cosplay experience this year as well as information about the creation or accumulation of my cosplay pieces will be up soon. 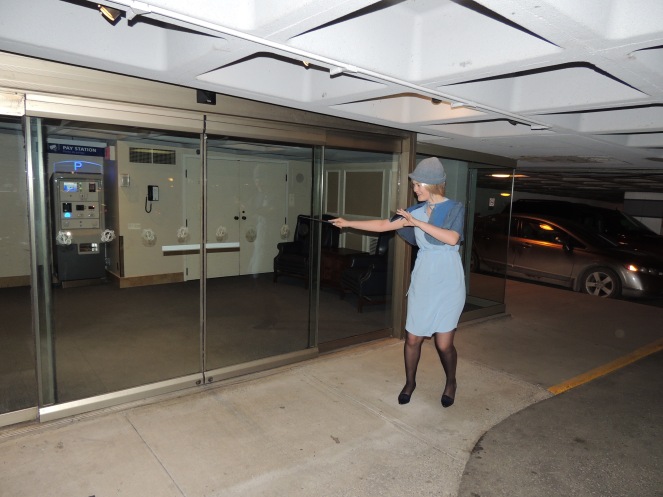